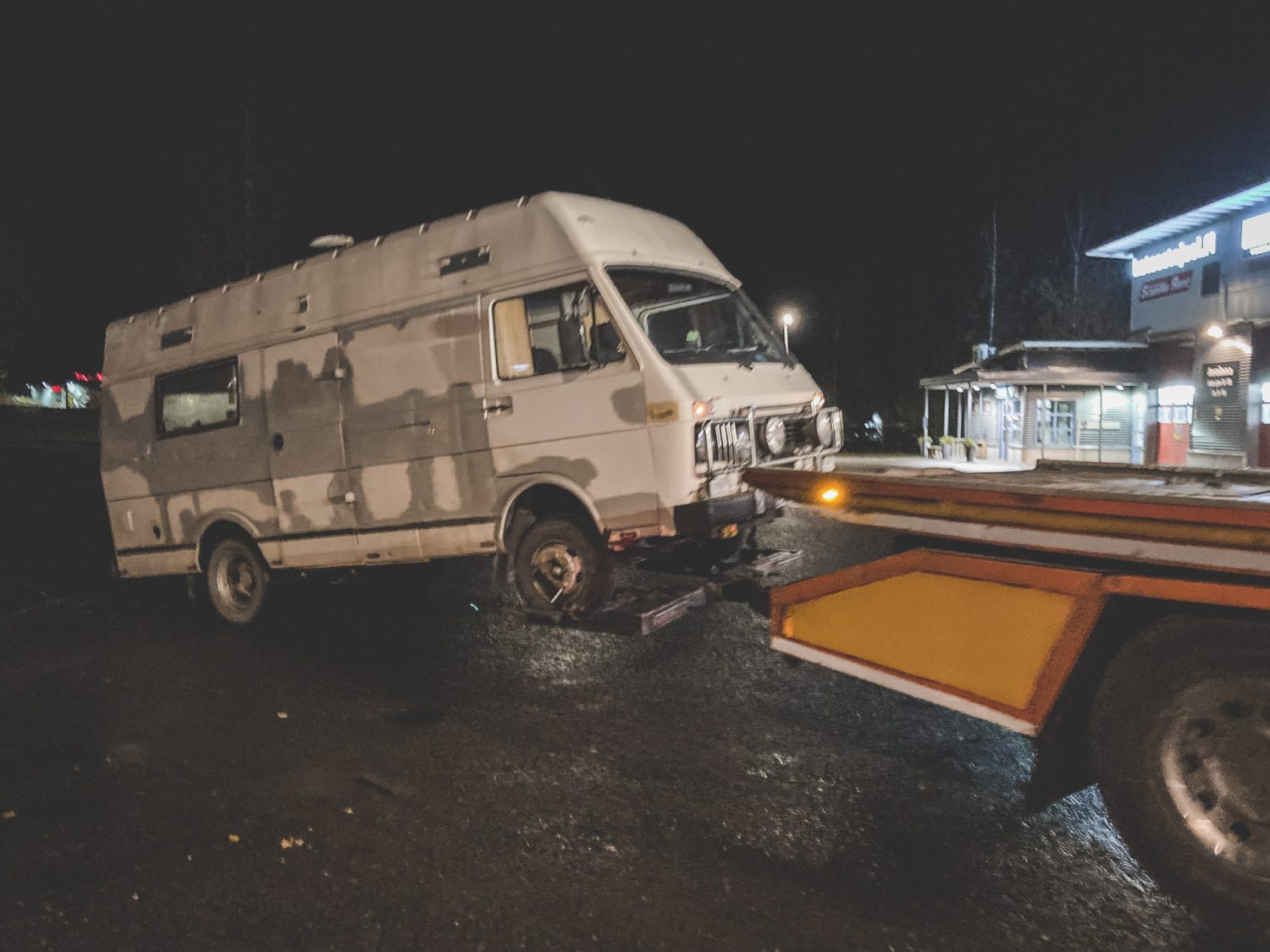 Finally a good reason to test out the traveling features of this lovely van and going for a longer trip: My idea was to go to check out an old Mitsubishi Pajero 4×4 in the south of Finland about 6 hours driving time away from home. The 4×4 would be a good addition to our current cars as the Finnish winter in the middle of the country can be quite long, cold and also with lots of snow. And as we are living on a private road which has limited snow cleaning operations going on, a conventional car can be somewhat troublesome sometimes. Anyway, back to the trip:

The idea was to drive 2 or 3 hours the first evening, then sleep somewhere and continue the trip the next day. And then similar when going back which would make it a 3 day and 2 nights trip with the van for a first real traveling test combined with a useful purpose.

It started all so well…

After packing up everything needed for a few days’ trip I started my journey on October 7th 2021 – it was a Thursday evening. Quite happy and motivated I left to drive and felt really happy and confident about the first real trip with my van.

However, it just took about one hour of drive until the engine suddenly did not respond to the gas pedal anymore for a few seconds and then went out while driving on a highway with about 80km/h. I had no chance than to pull over to the side and park it on the parking strip. A quick look under car got me scared.

It quickly came clear that this car is not going to move anywhere anymore on its own. So I called a towing car and waited some time for it to arrive. It was a Thursday autumn evening 21.30 (9.30 pm) and around -10°C outside. The towing company brought me to the next town which was just about 5 driving minutes away and parked my van at a garage that might have a chance to check the issue the next morning. So I made myself comfortable for a night in a town, different from what I expected.

The night was not very comfortable or relaxing as you can image. Sounds of cars on the road nearby kept me waking up. The next morning after some waiting time finally the guys from the garage came to check the car. They quickly inspected the engine and did not really find anything obvious. Their garage was not really into fixing big issues, more like simply doing oil changes and such easier things. Their recommendation was to go and buy oil and drive home slowly (it was only about 1 hour drive) and regularly check the oil. So that’s what I did.

After getting oil I started to drive back home and tried to avoid the highway as I did not want to stop again on the parking lane. So I drove smaller roads. After a few kilometers of drive the car sound increased and I realized that I have to stop the car to avoid any bigger damage. Just a few seconds before I happened to spot a car lift in a private house garage and thought, I could go and ask there if someone could check the car again. So I parked the car right next to the road and walked back to that house.

Someone was home and opened: a maybe 19-year-old Finnish boy. Quick side note: I believe Finns are not so used to strangers knocking their doors and asking for help. However, the boy said he is a mechanic and he could help me the next morning. So I prepared for another night next to the road. As the car made already really heavy sounds I did not want to move in any more than really needed.

Another night, another check, another tow truck

Later the next (third) day the boy checked the car, tried many things, adjusted the injection pump and suspected that the camshaft bearing was broken. He did not open the engine as his time and knowledge was limited.

Because the situation was still unclear and the car made so horrible sounds I decided to go home again. Not by myself but again by tow truck.

And that’s basically the end of this story and this trip. And also the end of the Pajero which I initially wanted to visit and did not even come close to.

I guess that there was a purpose why this happened and why I did not get to check the Pajero. Let’s see in future what that purpose will be.

By Phil, October 15, 2021 Philip finds his inspiration in everyday life and finds profound messages even in basic tasks.

The cylinder head is off April 2, 2022
Video of the engine running with its nailing sound February 17, 2022
Quick-fixing cracks in the roof April 16, 2021
Leave a Reply Cancel reply