Oil issue, fixing and creating another one… 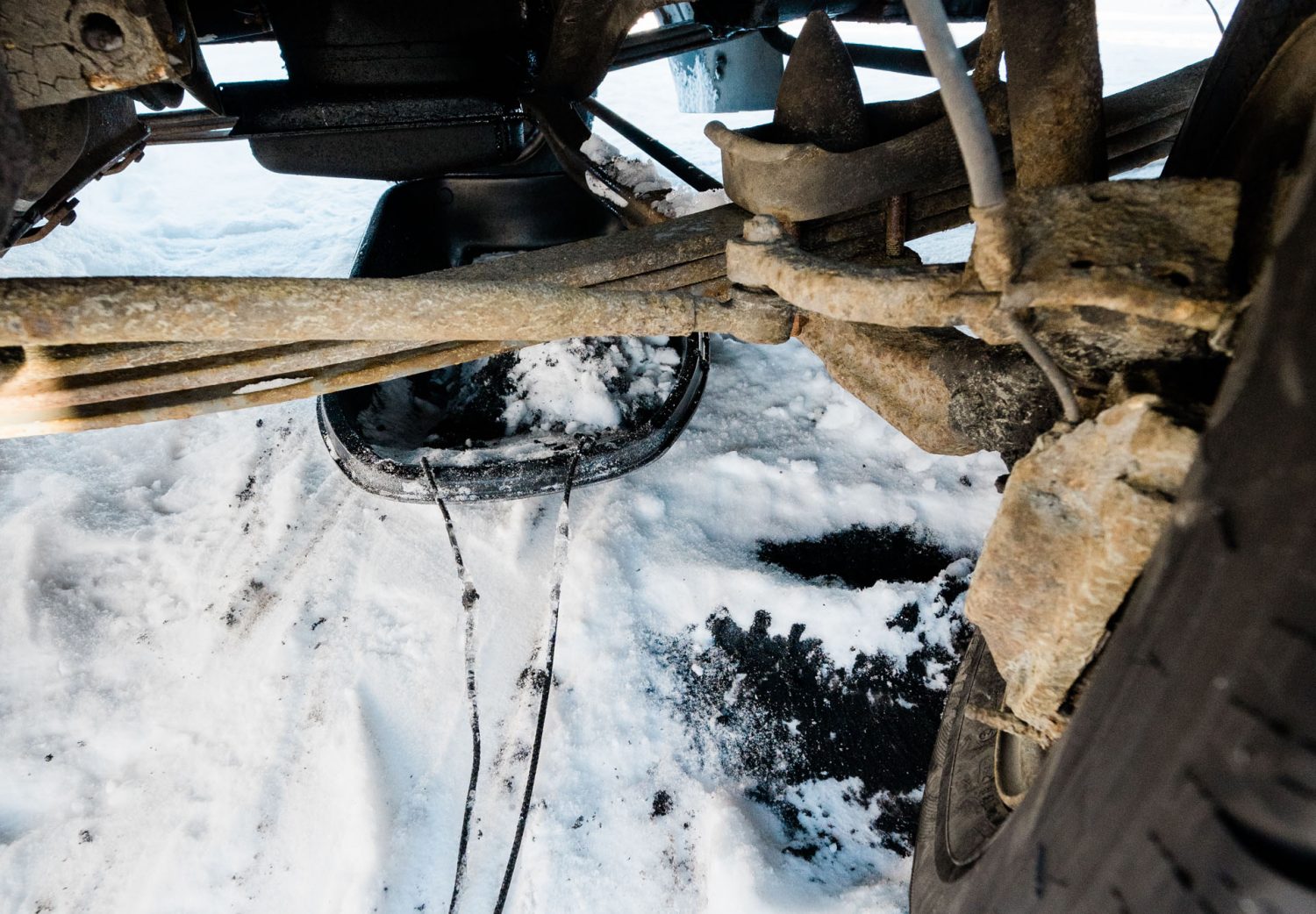 A few weeks ago, I started the van again in the cold and left it running a few minutes before I was about to drive it away. Because I had to remove another car that was parked behind the van, I had to get out again of the van. And when I put my leg on the ground I saw that there was coming oil from under the van. The snow below the van was soaked in oil already so I quickly stopped the engine and went to get a shovel to remove the oily snow from underneath the van. I also put one of my kids’ bobs underneath to catch oil that would still drop from the engine. As I had some work to do somewhere else (in our house), I had to leave the VW LT just without checking anyhting in detail. Only a few days later I was able to return and start checking what was wrong.

As I was aware that the engine had lost a fair amount of oil I also waited a few minutes for all the oil in the system to return to the oil sump/oil pan and then checked the oil level with the dipstick. No oil to be seen. So I started to pour oil into the system.
The VW LT uses 6,5l of oil in it’s entire system and I read that there is about 1l of oil difference from MIN to MAX marking on the dipstick. According to that, I started pouring oil into the engine, little by litte. After the first 1l of oil, I stopped, started the engine (we are still at subzero degrees at this time) to warm up the oil and distribute it in the system, waited few minutes after stopping the engine to gather oil into the sump and checked the oil. Long story short: I ended up repeating that process a few times and puring in the full amount of 6,5l oil into the LT. It had lost all of the oil within the system… (Side note: I probably never checked the oil level after the purchase so there is a chance that it already started with a low oil level).

The thought running through my head was now just:

Is it really possible to lose all oil through this tiny little whole where the dipstick goes into the engine?

Honestly, I would think not. So I had to extend my search either to find another spot of oil spilling or to be sure that there is no such. For achieving that I had to start cleaing the enginge on the outside from all the old dirt and oil to be able to really see whether oil leaks somewhere or not. And for a 41 year old engine, there was acutally quite little dirty or oil residue on the outside to clean.

You might know this issue when you think: ” Oh, because I am already here I could also immediately do this thing at the same time….” That’s exactly how it started. I had ordered a few weeks ago two new belts for the generator and the vacuum pump which both seemed to be already quite old and worn out. As the fan needs to be removed to install the new belts I had not yet done this work. But now would be the right time for it I thought.

After reading a nice article about changing the fan on the German VW LT forum I thought this should not be such a big issue. So once I was ready to go and work another cold Finnish winter afternoon outside at the van, I prepared everything to lie under the van and start removing some sheet metal that guides the air from the cooler into the fan. It was quite challenging to find the screws and open them because they were old and rusty, space was limited for the tools and it was again subzero temperatures with snow and therefore challenging to use your bare fingers for help.

After I had finally found all screws and the sheet metal started to feel lose, I tried pulling it out of it’s position and down under the car. It was still stuck with some rubber hose that closes the gap bewtween the metal part and the fan and after some wiggling I started to see some green liquid dropping down onto my workig blanket. I had push a whole into the cooler… Oh yeah!

It was thursday evening at 20:00 (8pm) in March in Finnland and there was about -8°C with wind and snow and I just knew: I can’t win this battle anymore today, I gotta leave it for another day.
So again, my good old helper the black bob assissted my this night in collecting all of the (about 13l of) cooling liquid that now thought had to leave the cooling system of the VW LT through this tiny little hole in the cooler. Luckily on friday morning all the cooling liquid was gathered in the bob under the car and had not gone anywhere else.

So the next task was clear: Fix the hole in the cooler of my mate, the VW LT that I call “Da.Peda”. As this is an interesting topic on its own, you gotta read the next post about this process.

By Phil, March 15, 2021 Philip finds his inspiration in everyday life and finds profound messages even in basic tasks.

The cylinder head is off April 2, 2022
Video of the engine running with its nailing sound February 17, 2022
The first longer road trip with the Campervan did not go as planned... October 15, 2021
Leave a Reply Cancel reply